Oceans cover over 70% of Earth’s surface, containing a majority of the planet’s animal biomass. Microbes form the base of the ocean food web, and play significant roles in the biogeochemical cycling of elements within and beyond the ocean, contributing about half of the oxygen in the planet’s atmosphere. Microbial communities are shifting geographically in response to anthropogenic climate change, and metagenomics is providing exciting new insights into these communities. Big data from large scale sampling expeditions such as the Global Ocean Survey and Tara Oceans have been used to characterise variations in taxonomy in different regions and show correlations between established metabolic pathways and environmental conditions. However, it has been recently shown that gene function within regions is not necessarily mirrored by variations in the taxonomy of the species inhabiting these regions. 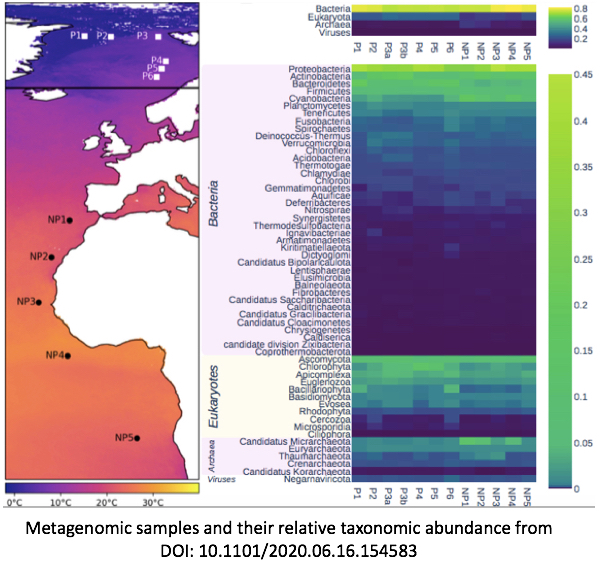 The main aim of this project is to analyse how the functional gene-scape varies between ocean regions so as to understand the metabolic potential of microbial communities responding to changing environmental conditions. The candidate will combine data from Tara Oceans, Mock’s lab and recent polar sequencing to identify groups of gene functions whose presence or abundance characterises different ocean regions. After functionally annotating sequence data using metagenomics pipelines, the candidate will use machine learning methods, such as non-negative matrix factorisation, to find groups of functions that describe variation in metabolic potential between ocean regions. Using clustering and visualisation techniques, the candidate will then identify groups of gene functions which characterise differences in ocean gene-scapes. In the latter stages of the project the candidate will develop models to predict function from environmental conditions, using approaches such as Bayesian networks.

The candidate will gain skills in a broad range of bioinformatics, data analysis, machine learning techniques, as well as a background in ocean microbes and experience with high powered computing.

Degree in Computer Science, Data Science or equivalent. We are looking for an enthusiastic candidate who is excited about applying interdisciplinary techniques to under-stand the potential effects of global change on oceanic microbes.